Scotland has some very exciting festivals which happen at different times of the year. These add to our rich culture.

Halloween is a popular festival in Scotland. It has now been exported all over the world with the USA turning it into "Trick or Treat".

The tradition of Halloween in Scotland is dressing up in a costume is called Guising.  This comes from the idea of disguising oneself so that the spirits which are around on Halloween (the eve of All Hallows Day) cannot recognise the person. 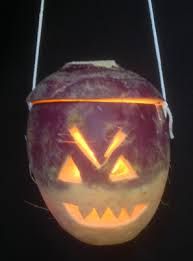 Guisers in Scotland are usually children - customarily they go door to door and will be given sweets, money, nuts and apples in exchange for providing entertainment for the household. Guisers are expected to recite a poem (often composed by themselves), sing a song, do a dance or play a tune on a musical instrument. Nowadays the custom of "Trick of Treat" has taken hold in Scotland and the tradition of Guising is now often limited to rural villages. Guisers traditionally carried a Neep (Turnip/ Swede) lantern but nowadays the more easliy carved pumpkin has been adopted.

Read more about the Celtic origins of the festival.

Also the traditions of Halloween in Scotland.

Hogmany (New Year's Eve) in Scotland is an important festival celebrated in many different ways across Scotland.

Traditionally the entire house must be cleaned thoroughly before the New Year begins (this is superstition).

Find out more about Scottish traditions at Hogmany and how Hogmany is celebrated in Scotland. 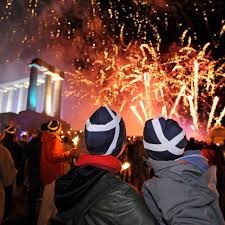 Find out more about the story behind this spectacular Scottish celebration.

St Andrews Day is 30 November and is the day of the patron saint of Scotland.

It is celebrated as Scotland's National Day.